Just looked at my Calendar, 13 October, I am overwhelmed with memories of this date in 1997…the day my son Daniel and I set off in a 3000 miles rowing race. The culmination of two years of fund raising and training. Two years of hard work, fun and new experiences; that turned me from a couch potato into a superfit ocean rower! 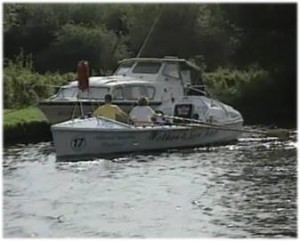 As we stepped into our 23 foot wooden rowing boat, Chay Blyth, now Sir Chay came over and said to me:

“Just how much rowing have you done Jan?”

He grinned, good answer, then he said, more kindly…

“After 2 weeks, you will have all the rowing skills needed to get you across”

Then I remembered Chay gave me this great quote:

‘If you think your courage will fail you, when things get bad, it rarely does…good luck’ 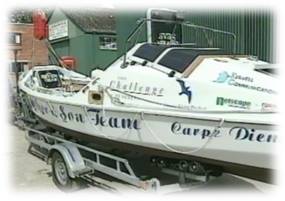 We rowed out of the harbour for only the second time. We had been so busy finishing the boat, that we had forgotten that we had only rehearsed rowing out the harbour this previous night. We had done this to make sure we could row out without making complete fools of ourselves!

We rowed for 3 hours, the longest we had rowed in our lives. At the beginning, small boats followed us waving and cheering. They wished us good luck and fair weather, but after a while we were alone…. not another boat insight! We shipped the oars and looked at each other, Jan and Dan, 3000 miles ahead and a pair of oars…what have we done?

It was a calm hot day and we decided to begin the regime we had been advised to follow: one person rowing for two 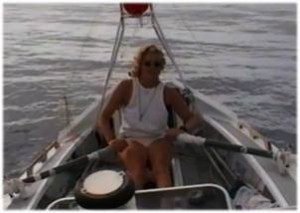 hours alternately, so we could keep the boat moving over the entire 24 hours.  I looked to Dan to start and he was suddenly violently sick, doubling over with pain from stomach cramps, shivering and shaking…obviously very poorly. Due to this, I took the first shift of the row, and for the next two days I became the main rower. Dan would come out of the cabin, for two hours to give me a break, but bless him… he was too ill to make much progress. I have to confess at  3am, I had a few tears and thought to myself…This wasn’t part of the bargain.

As the night progressed the weather became stormy.  I was thrown all over the place, and poor Dan dragged himself out to help.  We found we were being pushed towards a dark mass. 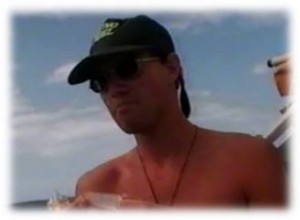 Then we saw lights twinkling and realised it was the Island of Hierro. We were hurtling dangerously close towards the jagged rocks on the coast.  Don’t tell me that we were going to be wrecked before we had even started the race? Dan in spite of being so ill, tried putting out the sea drogues. This is sometimes called storm drogues or called a sea anchor (a device you attach to the stern of the boat and it is supposed to slow the boat down, keep the hull perpendicular to the
waves). I prayed, It was so rough, we stayed in the cabin (although it was really too small for two).  In the morning we realized we had survived! Safely past the island and well on our way. The boat was being pushed by the wind and current in the direction we wanted to go, our rowing was adding to our speed….towards our goal… Barbados! 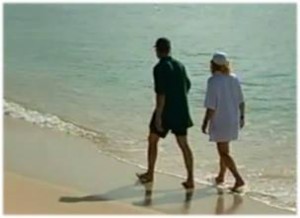